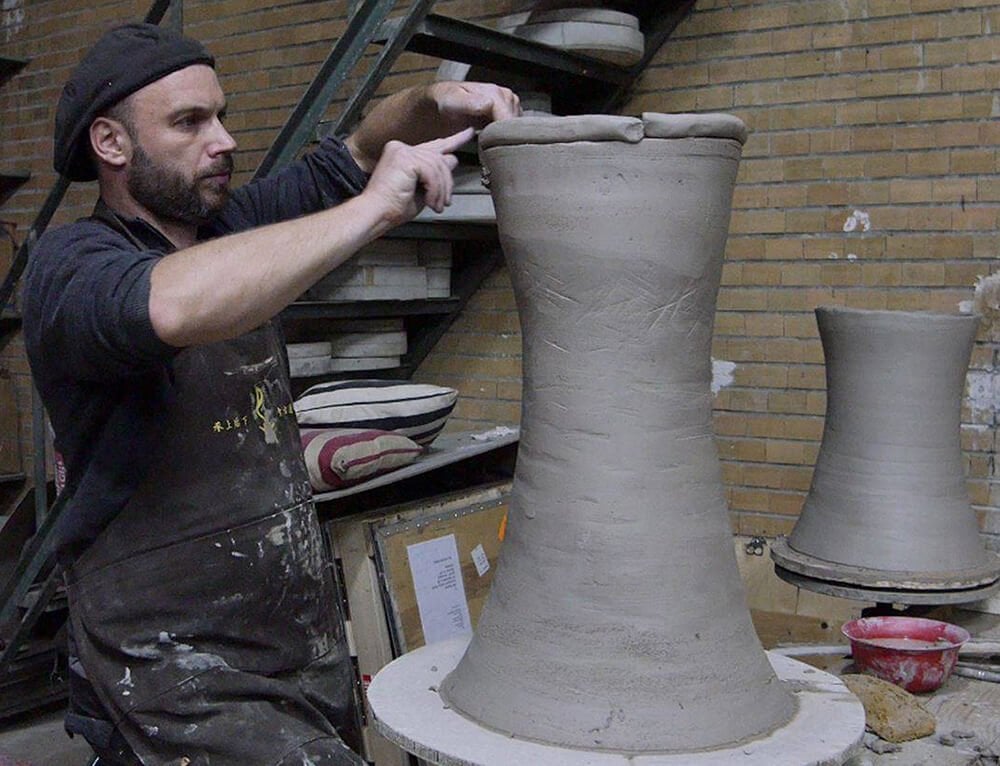 Vlad Basarab is a visual artist working with diverse mediums, concentrating on ceramics, installation, video and performance. He perceives clay as the material that embodies the most dynamic qualities of life and nature due to the transformations it undergoes. From the beginning of history, there existed a strong connection between language and clay, as early forms of written language were found on clay tablets. He uses art as a catalyst for reflection, as a holder of information from the beginning of time.

His art shifted its focal points from the fluctuations of memory appearances, constrained by individual filtering media, to the struggle between perishment and permanence, being addressed in the temporary installations, performances and videos. Becoming more concerned by the impact of censorship on culture, Basarab emerges his work towards questioning methods of transmitting memory, emphasizing the human need to safeguard the past and conserve historic truth. It pursues the need for preservation due to the extreme fragility of memory, knowledge and past.

In our fast-moving society with plenty of distractions, Basarab senses the increasing difficulty of remembering, despite memory being the only link to our past, our identity and our heritage.

Born in Bucharest, Romania, in 1977, Vlad Basarab has had over 20 solo shows in the US and Europe. He started working with clay in 1986 under the guidance of traditional Romanian potters from Horezu, Victor Vicșoreanu and Dumitru Mischiu, considered living human treasures by UNESCO.

In 2001, he received a BFA in Ceramics from the University of Alaska Anchorage. In 2013, he received the MFA in Electronic Media from West Virginia University and is currently a PhD candidate at the University of Art in Bucharest. He was awarded the Rasmuson Foundation for the Arts Grant in Anchorage, Alaska (2008) and a Fulbright research grant in Romania (2013). In 2014 he won the 1st prize for the international competition for the Monument dedicated to the Romanian Language in Chișinău, Republic of Moldova.

He is a member of NCECA, of the International Academy of Ceramics of UNESCO (IAC) in Switzerland and of the Union of Artists of Romania. He is also part of the Galateea Contemporary Art Group in Bucharest. He is a founding member of two artistic groups: Pâlnia (The Funnel) since 1995 and NEURON since 2014. He has collaborated extensively with other artists, dancers, actors, film-makers in the US and Romania.